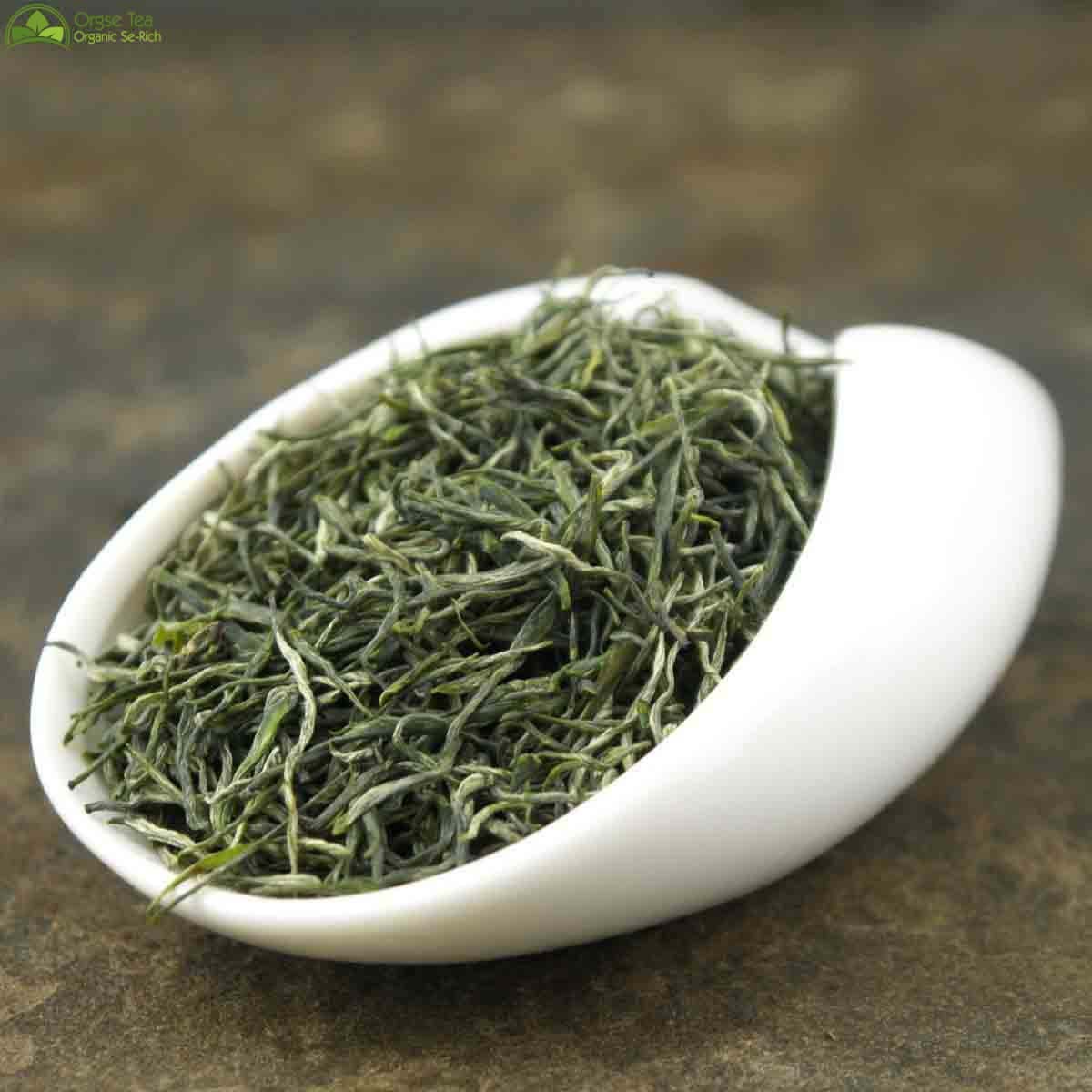 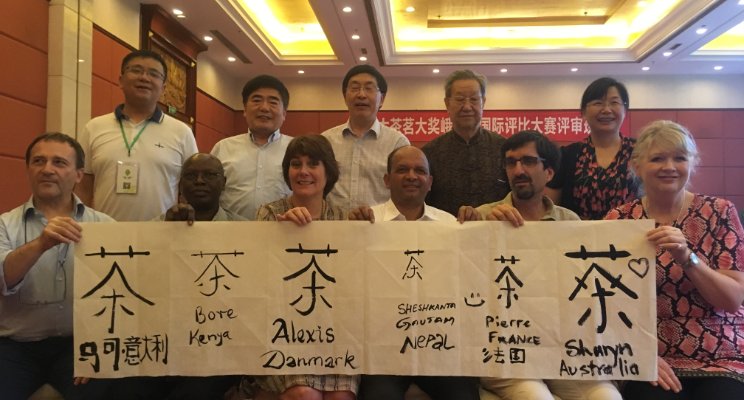 Emeishan is one of the 3 main areas of quality tea production of the province of Sichuan in South-West China. It is a sacred range of mountains culminating at 3,099 meters height, and often covered by a misty fog. The hot, subtropical and mildly humid weather is ideal for growing and developing the best aromas of tea, at altitudes that go roughly between 1,000 and 2,200 meters. Sichuan is one of the two or three Chinese provinces in which tea was first cultivated, probably as a medicinal plant, more than 3,000 years ago.

Being a member of the jury in a major Chinese tea competition was quite an honour, and a thrilling experience, at several levels: cultural, social and sensory among others.

Among the jury at this competition were three famous Chinese tea experts, M YU Ganting, our dean and nation-wide respected tea expert, M LU Chenyin, M FENG Huasiong, chair of the Tea Committee, and six foreigners: Marco Bertona, an Italian tea expert trained and graduated as a third level tea expert in China, M. Sheshkanta Gautam Director of the Nepalese Tea and Coffee Development Board (Nepal produces excellent teas), John Gore, director of the Kenya Tea Research Institute, Sharyn Johnston, founder of the Australian Tea Masters and Alexis Kaae, founder of the Danish tea association, two women who run successfully their tea businesses in their home or adopted countries, importing tea from a diversity of Asian countries. According to Sharyn, the best teas in the world are found in China, although they very rarely find their ways to other countries, apart from other East Asian countries. 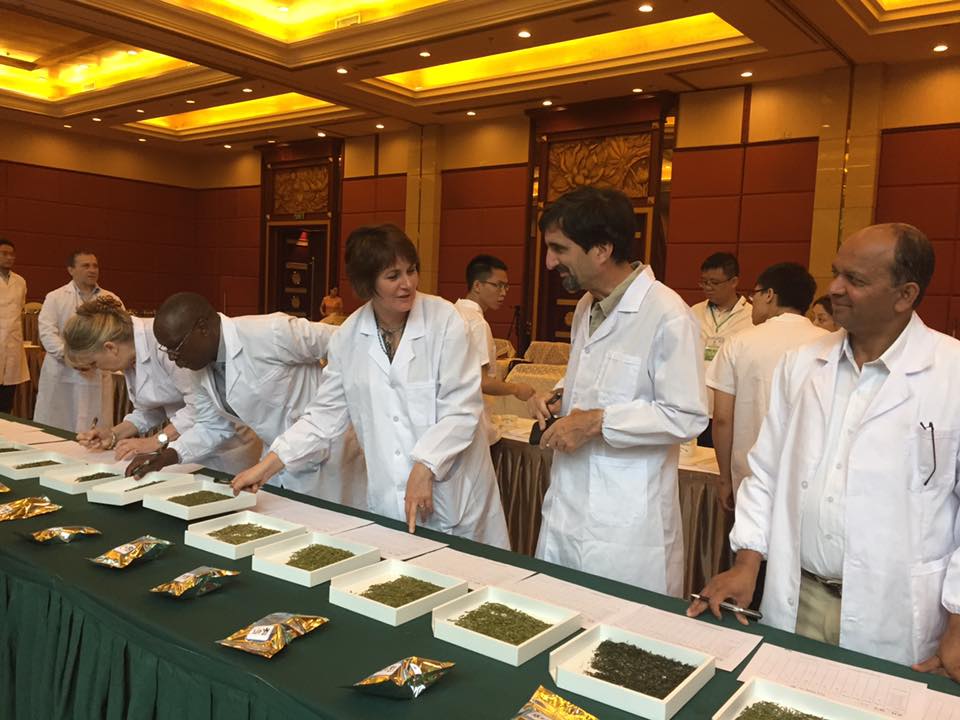 Four basic criterias are applied to the evaluation of teas in China:

Following the Chinese tea evaluation standards, all teas are infused with boiled water, for 4 or 5 minutes, depending on the type of tea tested.
Dry leaves provide indication on the quality of the tea picking and selction, the liquor should be vibrant and in adequation to the type of tea infused, wet leaves provide precisous information on fragrances exhaled by the tea leaves, as well as possible visual indication of over-oxydation of leave tips. Cupping is done once the infusion is cold, and provides indication of astringency, acidity, among others. Like for wine, only a small amount of liquor is put in o the mouth, and after a few cups a new jury member understands why even that small amount is spit in bins set along the tasting tables.

A lead Chinese expert gives the first evaluation for every criteria for each tea on a shared sheet, the other jury members indicating a differential to that score. Our lead expert was M. LU. Overall, and the scores ranged between 80 and 96, and differential between -2 and +2. 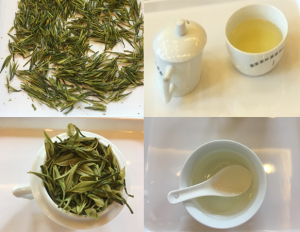 For this competition, we tasted more than 180 different teas during a total of 6 hours, counting a majority of green teas, several red teas (called black teas in the West) as well as wulong teas (oolong), some post-fermented teas and a few flower and medicinal plants infusions. For readers unfamiliar with Asian tea categories, we will provide information on those in an upcoming post. Green teas came in different shapes and colors, among which I could recognize Longjin and Anji teas. Some were curled, others straight. They ranged from light green, like Anji bud and first leaves which are almost white when wet, to dark greens. Red teas also came in many types, often partly yellow, a sign of the successful oxydation process. Post fermented Puerh teas were displayed unclustered from their cakes or tablets, and three of them in a small citrus fruit, presumably yuzu.

Most teas tasted were of uppermost quality, which you wouldn’t easily find on sale abroad. A few, probably less than 5%, had an unpleasant taste, and 2 or 3 of the wulong had a slight charcoal aftertaste, revealing some minor flaw in the transformation process. But quality of the selcted teas was overall excellent.

Being part of a jury of Chinese teas is an amazing and thrilling experience for the true tea connaisseur. China is the place of origin and the authentic motherland of tea. It produces hundreds of different teas, which are as different one from one other by variety, terroir, process and knowhow, as different wines are in Europe.

The results of the competition were disclosed and the awards handed out at the Emeishan International Tea and Culture Fair (July 6-9th). 8 gold awards were given, as well as 75 silver awards. During this major expo, which was part of the “New Silk Roads” (or “One Belt One Road”) strategy of the government of the Republic of China, I also gave a presentation on “Chinese tea and European sustainability and organic standards and markets”. I may put this presentation online if enough followers ask for it. Would you be interested?